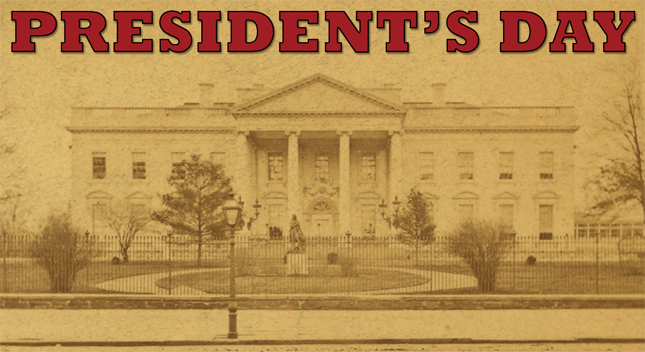 Regardless of their individual place in history, “President of the United States” is a very exclusive club. In honor of President’s Day, we are featuring inventory related to our greatest presidents as well as some presidents of more modest accomplishment. Be sure to see our signed portrait of Franklin Delano Roosevelt from his 1932 presidential campaign, an extremely rare William Henry Harrison document signed during his 30-day presidency, a Lincoln-signed military commission, a letter from Warren Harding praising America’s post World War I return to a peacetime economy, and a bronze plaque of Theodore Roosevelt featuring his famous “strenuous life” quotation.

All of these, and much more presidential material, can be found on our website, www.sethkaller.com

John Adams Grants Two Tracts of Ohio Land to a Revolutionary War Veteran
Passed on June 1, 1796, An Act regulating the grants of Land appropriated for Military services, and for the society of the United Brethren propagating the gospel among the Heathen made accommodations to survey and sell land in the Northwest Territory. This particular act enabled the President to grant land in the Ohio Valley to former Continental Army soldiers for their service in the Revolutionary War.
#22734   $7,500

John Adams Agrees to Give Benjamin Franklin Guardianship Over a Boston Minister’s Grandson
The relationship between the United States and France takes a personal turn as Adams leaves a friend’s grandson in Franklin’s care.
#22884   $26,000

John Quincy Adams Signs a Patent for Improving Bellows
A handsome vellum patent document, signed by Adams as President, is accompanied by the inventor’s two-page description of his device.
#21830   $3,000

Andrew Jackson and the Fight for Florida
At the height of the U. S. diplomatic crisis with Spain over Florida, Old Hickory makes plans to return to combat in Florida while venting his rage against Treasury Secretary William H. Crawford.
#21944.99   $25,000

Van Buren Handles an Early Falklands Crisis
In this detailed letter, Martin Van Buren instructs the United States Chargé d’ Affairs to Buenos Aires to inquire into the Governor of the Falkland Islands’s warning U.S. fishing vessels to stay clear of valuable whaling and seal fisheries in the area.
#22216   $2,900 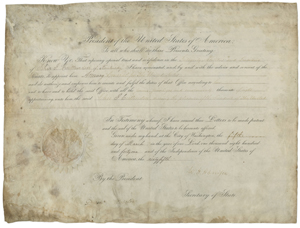 William Henry Harrison Signed as President—Extremely Rare
Harrison’s death from pneumonia after 3o days in office makes his tenure the shortest of all the presidents. Our current census finds fewer than 40 Harrison documents (including signed and unsigned letters, free franks, and clipped signatures) as president in any format, many of which are in permanent collections.
#22920   $145,000 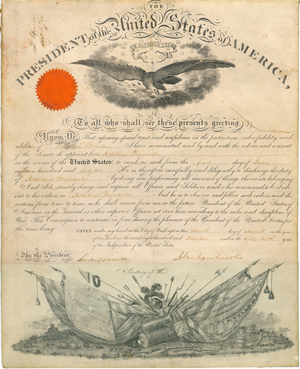 James Garfield Opposes “the Democratic Silver Scheme”
Congressman James Garfield writes to Samuel Ruggles, a New York lawyer, Canal Commissioner, and businessman regarding monetary policy. “We have thus far successfully resisted the Silver Scheme, but the Democrats renew the fight every day determined, if possible, to carry it through.”
#22564.01   $1,500

Theodore Roosevelt’s “Doctrine of the Strenuous Life”: A Scarce Bronze Plaque Featuring One of His Most Famous Quotes
Roosevelt’s personal philosophy of life is cast in bronze under his profile portrait in bas relief, followed by a facsimile of his signature.
#22579   $1,750

Harding’s Return to Normalcy–and Isolationism–after World War I
Key political circular from the first-year Republican President, written to influence off-year elections in New Mexico and other places. Harding justifies, and praises, the rapid postwar dismantling of America’s military by Congress, while backhandedly criticizing the inattention of his predecessor—Woodrow Wilson—to the peacetime transition. “Vast expenditure without proper consideration for results, is the inevitable fruit of war.”
#21124   $2,600

Herbert Hoover Combats Starvation in Europe Before the U.S. Enters World War II
As honorary chairman of the National Committee on Food for the Small Democracies, the former president tries to rally support to aid the women, children, and destitute in those European nations affected by World War II and save them from the inevitable famine and pestilence that confronted them.
#22384   $750 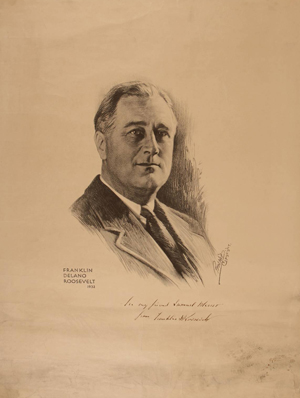 Portrait of FDR, Signed and Inscribed by Roosevelt to Samuel Messer
This image of President Roosevelt was the official portrait for the 1932 campaign. It was drawn by Jacob H. Perskie, the photographer and portrait painter for FDR in the 1932 and 1936 presidential campaigns. It is inscribed to Samuel Messer was one of the largest stockholders of Quaker State Oil Refining Company.
#22467   $1,400

Posted by SethKaller on February 18, 2013 in General 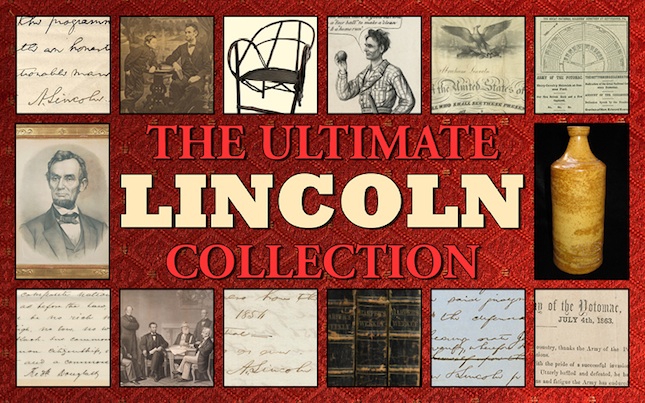 We are offering a unique opportunity for one high-level collector with a passion for history—a comprehensive collection reflecting the span of Lincoln’s adult life from prairie lawyer, to the Presidency, to immortality in the American pantheon. This ready-to-display collection is being auctioned on eBay through February 18th, and is guaranteed to be delivered in time for the ultimate Oscar party.

Beginning with the chair in which Lincoln was sitting when he received the telegram that he had won the 1860 Republican Presidential nomination, the collection contains more than 50 items, including 12 documents handwritten and/or signed by Lincoln, and others by Frederick Douglass, William T. Sherman, and Ulysses S. Grant, along with rare books, artifacts, images, and imprints.

The winning bidder will also be helping Free the Slaves, which will receive 10% of the final sale price. The organization, based in the U.S. and operating around the world, works to free victims of modern-day slavery. Dr. Kevin Bales, the group’s co-founder, writes, “We are honored that Free the Slaves has been chosen to receive a portion of the proceeds from the auction… Our group will use the contribution to help finish what Lincoln started—creating a world forever free from slavery.”

Highlights and a brief summary of the collection are available on eBay and links to more detailed descriptions are on our website.

On Lincoln’s birthday, February 12, we will be hosting an open house at C. Parker Gallery, 17 E. Putnam Ave., Greenwich CT. Special showings are also available on request. Call me at 914-289-1776 or email me at info@sethkaller.com.

A special note from Seth Kaller
Last year, I joined the advisory board of the Papers of Abraham Lincoln, based at the Abraham Lincoln Presidential Library and Museum in Springfield, IL. My first meeting coincided with the 10th annual Lincoln Legacy Lecture, where I saw a powerful keynote presentation on modern day slavery. Since then, I sought an opportunity to apply my interest in history to a significant problem that remains today. After several conversations, Free the Slaves was recommended to me as a fitting choice to further Lincoln’s most important legacy.

This collection inaugurates a new Seth Kaller, Inc. policy: for every sale we make of slavery-related historic documents, we will make a donation to Free the Slaves. If you would like to learn more visit www.freetheslaves.net

Posted by SethKaller on February 9, 2013 in General